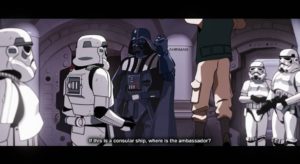 As an aspiring sci-fi author, I have a somewhat complicated relationship with Star Wars. On the one hand, I love everything about Star Wars (Hello, see the previous post?) and will be celebrating May the Fourth with all of you. On the other, stuff has happened to the Star Wars franchise that makes me realize an uncomfortable truth: You love Star Wars, Jackson, but Star Wars doesn’t love you.

Maybe you saw this news story on Tuesday – Disney took some heat for some poorly-worded tweets connected to MayThe4th. According to the news story, ‘Disney Plus, encouraged fans to share their favourite Star Wars memories using the hashtag on Monday. It followed up with a legal warning suggesting any user who tweeted the hashtag was agreeing to Disney’s terms and letting it use their content.’

Then the fans exploded with indignation, and Disney walked their comments back, saying ‘that the wording applied only to specific tweets in the original thread.’ I’m over here like ‘Um, kay …’ Disney’s social media faux pas rips the Band-Aid off of many fan fears that festered ever since Disney bought Star Wars from George Lucas. They want to be seen as cute and cuddly, but then they drop the Death Star on your head. It’s hard to look like an Ewok after you threaten to force-choke Twitter.

And look, I love both Disney and Star Wars. But that doesn’t mean I love what they’ve become. Forty-plus years after New Hope, I hung up my Han Solo jacket. Then I started writing new stories, and exploring new universes as an emotional necessity. I wanted to find new scifi universes I could fall in love with, and that would love me back.

So if any of this resonates with you, if that Twitter thing is the straw that breaks the camel’s back, know that you aren’t alone. If there’s something about Star Wars in a post-prequel era that doesn’t sit well with you and you’re really sure what it is, but the feeling won’t go away, maybe I can give you the words. Let’s say it again, for the people in the back:

You Love Star Wars, but Star Wars Doesn’t Love You

“This is all stupid,” some might say. “I still love Star Wars and everything you’re saying is wrong!” Okay, that’s cool. I’m not saying that you have to stop loving Star Wars. I still do, myself (Remember the start of this blog post?). But I think it’s important to give myself the freedom to see things as they are, to look beyond the obvious.

It’s always been my experience that science fiction isn’t just like fiction. There’s a central cultural truth about sci-fi that I believe even if I don’t have the empirical data to back up. Here it is: Sci-fi fans and creators enjoy some mutual interaction / control over the universes. Star Trek, for example, has gone out of its way to include fans in the movies, to the point of hiring them to be extras on different films (See Star Trek, the Motion Picture)

Star Wars doesn’t follow that Fan Happiness Playbook. They’re content to keep fans on a tight leash, and let’s be honest: in many ways Star Wars fans are to blame. So I don’t completely fault Disney for exercising that level of control over Star Wars. At the same time it’s important to see the relationship for what it is: Star Wars doesn’t love you.

The Good News Is …

Being aware of that, giving yourself permission to realize that, is liberating in many ways. You can enjoy Star Wars when you want to, when it’s doing something for you. Then when you’re finished, go enjoy something else! I suggest old 70s sci-fi – tons of interesting old ideas down there.

But the main thing? Understand what Star Wars is, so that you can go decide what YOU want to be. Don’t forget that, don’t lose sight of that. YOU are in charge of your own universe. Go make it something you love.