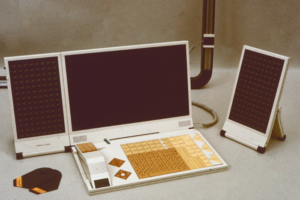 This Sci-Friday comes courtesy the former Soviet Union. ‘Soviet futurism’ was a concept early on in the USSR, but it continued throughout the regime in the form of some fascinating concept art. Today, let’s explore thing right out of a retrofuturism catalog – a Scifi Soviet Smart Home!

How did this start? Two words: Russian Futurism. That’s “the broad term for a movement of Russian poets and artists who adopted the principles of Filippo Marinetti’s “Manifesto of Futurism,” which espoused the rejection of the past, and a celebration of speed, machinery, violence, youth, industry, destruction of academies, museums, and urbanism;[1] it also advocated the modernization and cultural rejuvenation.”

The Soviets were keen on describing what type of future they were hurtling toward, and made use of books, art, and movies to help explain what they were hoping to achieve.

“In 1970, the staff of the Soviet journal “Science and Technology” predicted full automation of the construction of buildings, roads, dams and the emergence of a whole network of ground and air transport, operated by an autopilot, by 2000 … One of the prototypes of the modern smart home was the project of electronic equipment “Sphinx” (a superfunctional integrated communication system).” – from slavorum.org

Kick back, and enjoy this video walkthrough of the Scifi Soviet Smart Home “Sphinx”:

You can read more about the Sphinx home here.

I wrote a scifi short about the bad side of smart homes, but this is still interesting nonetheless. Enjoy and Happy Friday!