Continuing from Monday, I believe very strongly that we need to stop with dystopian science fiction. Like, yesterday. I don’t have the data to prove a direct causal link between dystopian SF and what happened last week. Yet, the parallels between Hitler’s fascination with Old Shatterhands and last week’s rioters dressed as post-apoc NPCs is impossible to ignore. In fact, some have suggested that participants are unwittingly part of an ‘alternate reality game’ – creating a self-sustaining narrative as part of gameplay.

So again – this isn’t about politics – this is about my responsibility as a storyteller. The last twenty years of dystopian fiction may have some responsibility to bear in terms of how people perceive mass insurrections, popular uprisings. Would you, would I, want to be responsible for helping people think it’s okay to put themselves in harm’s way? You already know the answer to that question. Let’s now conclude with some reality checks for what life will be like in a true dystopian scenario:

Everyone You Care About Will be Gone

Stop for a minute and look at this picture on the right. It’s the photo of a German prisoner of war returning to his home town of Frankfurt to discover his house bombed and his family gone. Not evacuated, not homeless, gone. They died in the bombings of Frankfurt. Likely, he thought of his family time and time again as he drove himself to get home safe.

Now, let’s talk about you. Let’s remember that heroes become victims in the blink of an eye. War kills innocent victims far more than enemy combatants. Consider what will probably be waiting for you on the day you, by some miracle of chance, survive this coming dystopia. You’ll probably be injured, suffering from PTSD. Watch those old videos of war victims. Imagine realizing that those bodies aren’t strangers, they’re friends and family.

Imagine coming home to the smoking crater of your home.  Your parents, kids, siblings? They’re all gone, now. If you’re very lucky, you won’t have to see their dead bodies or dig their graves.

But again, let’s say that’s not enough. Maybe you think surviving the end of the world is a good thing, or you plan on prospering in a dystopia. You might be looking forward to being Mad Max or Maxine in the upcoming nitro-fueled wasteland. Well before you get there, sport, let’s keep going. Here’s why all that cool stuff isn’t going to happen to you:

You Will Not Survive the End of the World

Yes, dystopian fiction is ‘escapist fantasy.’ But not because the end of the world is a fantasy. The actual fantasy is that you will escape; that you will survive. You probably won’t, and here’s why.

So, reality check: in a real dystopia, you will likely die. Pick a reason: War, from violence, disease, starvation, easily-treatable injuries that become lethal because hospitals don’t exist anymore. Remember that moment in the Postman where the protagonist takes care of his teeth because he remembers people dying of dental infections. It still happens, even in the 21st Century. Let that sink in the next time you decide to skip flossing.

Why I’m Telling You This 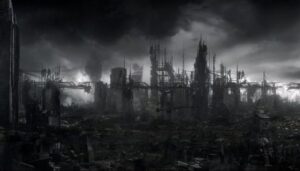 Make no mistake, I take no joy in writing any of this. This piece is designed to help explain my thoughts as a writer and human being. I think it’s important to use art to light the way to better places for mankind.

I also decided to say ‘please, stop and think’ to my fellow authors. We can write the most exciting stories, ever. If we’re not using our creative energy to make life better than others, then this may serve as an important inflection point. If we can imagine the end of the world, we can also imagine the start of a better one.


My name is Jackson Allen. My intention is to be a self-sufficient science fiction author. I spend my time actively writing, querying, submitting neo-Golden Age scifi and I analyze future trends, asking: "how can new tech and innovation help kids feel excited about the future?" Lots of self-published shorts - actively querying for a formal, mainstream publication house.